The new railings and staircase have now been added to Jubilee and the basement.
The basement stairs are now in place and I'm really pleased with how it is coming together. 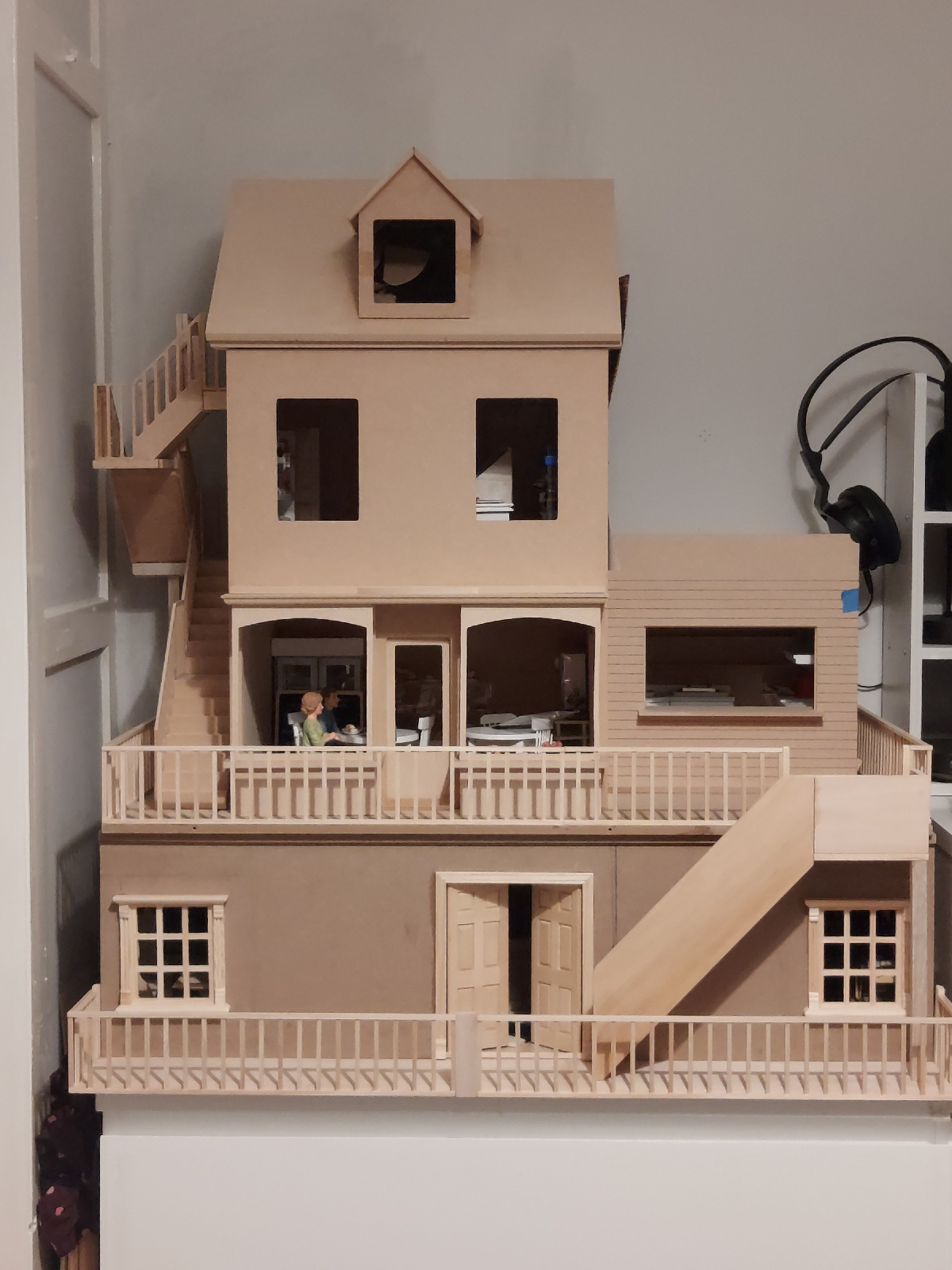 I'm not loving the basement windows, so they will be the next thing to be replaced. I've got two bay windows on order for the pub and french doors for the toy shop.

Once the build is complete I next need to decide on the exterior finish. There are so many options to choose from. I've used brick and stone papers before on previous projects and I've also used textured paint finishes.  I've always fancied using brick compound but I'm really worried I make a mess of it. I want to do something easy, but I also want it to look spectacular. I think more research is needed.....

I've always made a few alterations to kits I have bought in the past and Jubilee is no exception. It started with the addition of an exterior staircase instead of stairs within the rooms and I'm altering quite a lot more as I'm going along. I've learnt just recently that this is called kit bashing.
The basement kit has had quite a few alterations. I bought this particular basement based on it's dimensions, it was the perfect size for where it was going to stand. But there were quite a few things I didn't like about the front of it. 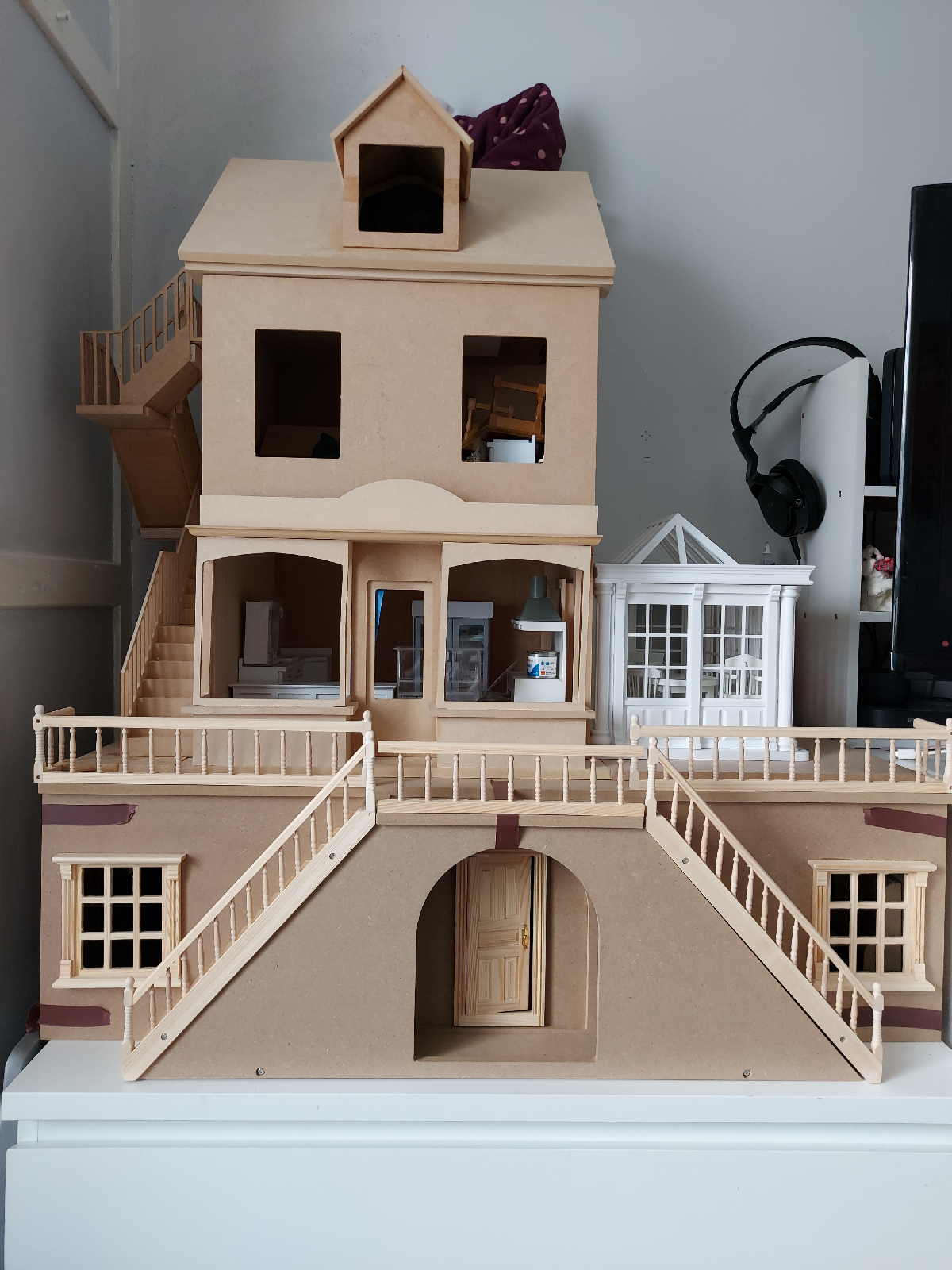 I felt the arched stairs were not in keeping with the rest of my project, and I couldn't see how the door could be accessed from the bottom of the stairs. Yes, I know it's only make believe, and that my little people aren't real, but I can't be the only person who wonders about things like this.
I decided to replace the arched stairs with a single set of stairs instead and changed the single door of the basement to a large double door. 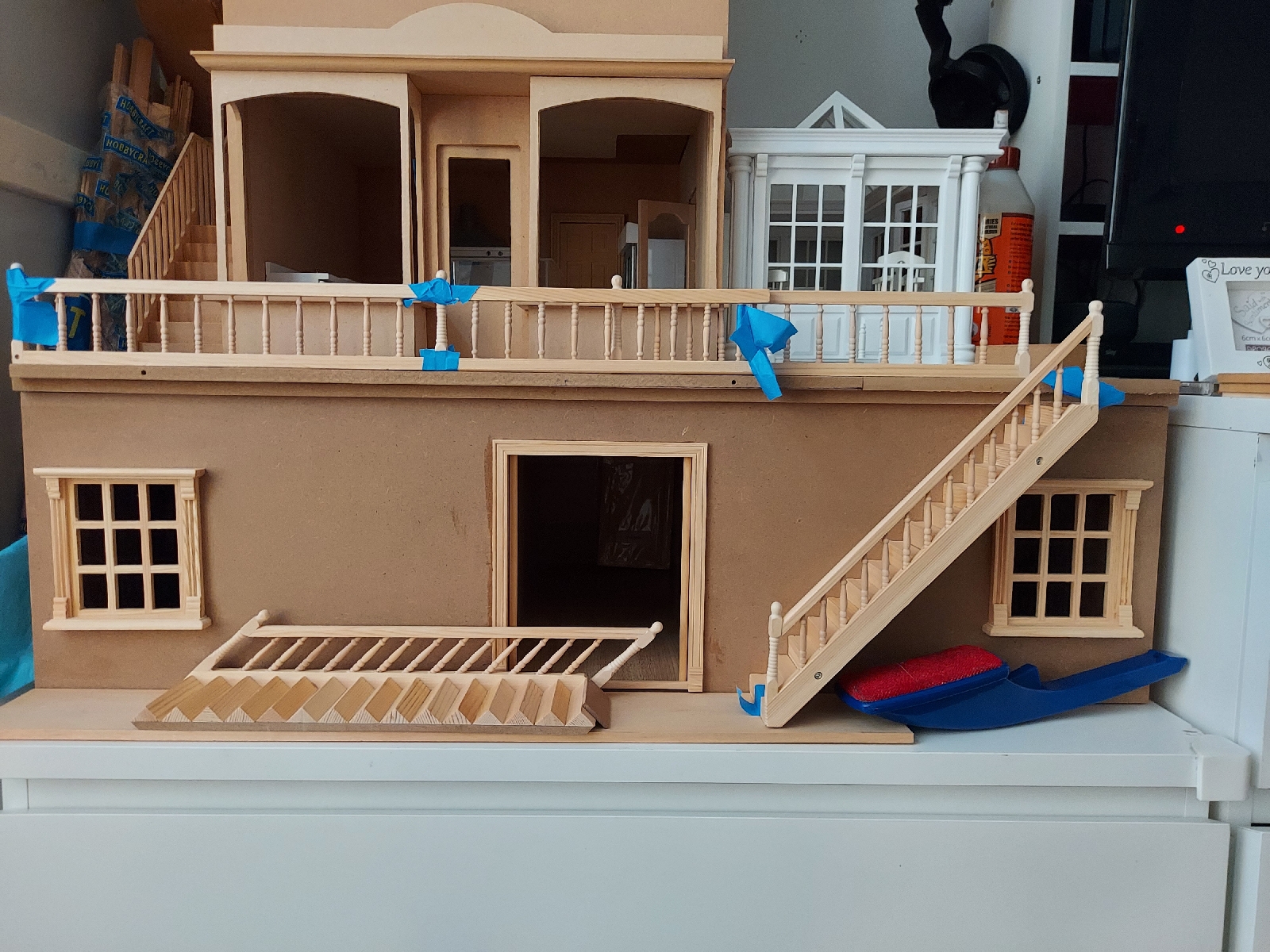 I don't like the balcony railings so I've ordered some new ones, and I'm undecided whether I like the windows, I think they need to be a bit bigger so that I can see into the rooms easier.
Another major change is that I have got rid of the conservatory. It seemed very low in comparison to the first floor ceiling and it just didn't look right. 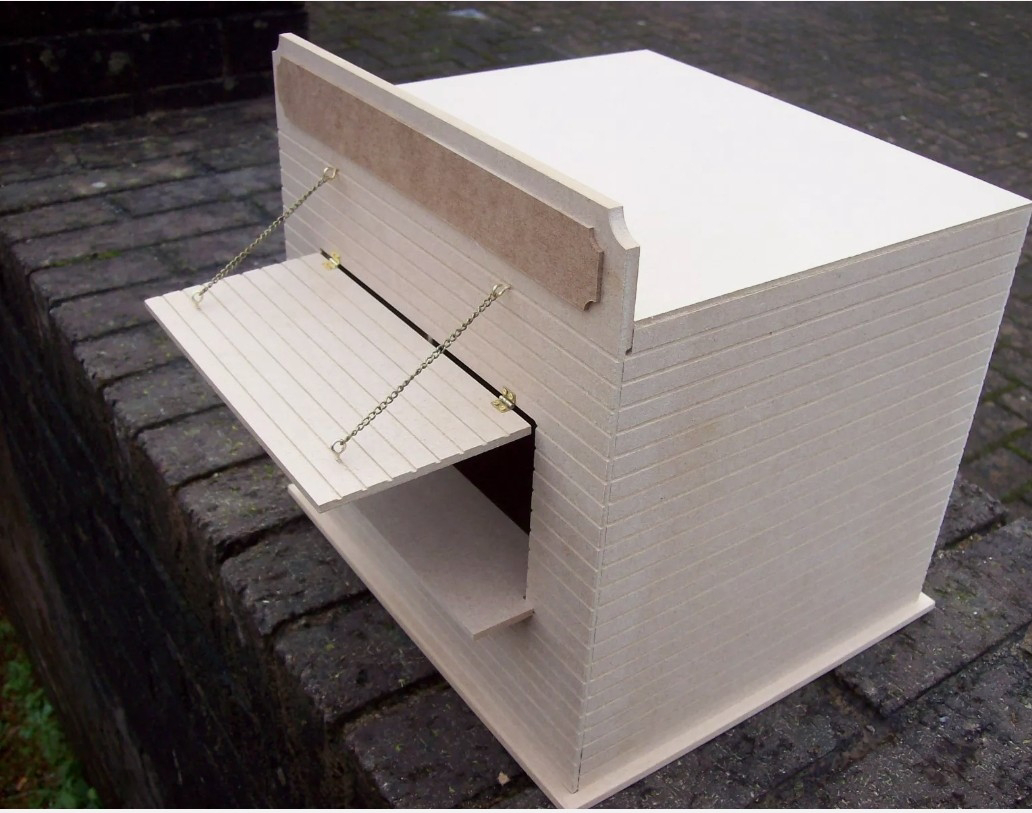 Instead I now have this little kiosk which I've attached to the side of the tea room. This will be a takeaway which will also serve as the tea room's kitchen.
In other news after weeks of pondering my granddaughter and I have reached our final decision on what is going in each room.
The attic will be an Arcade will slots and game machines. 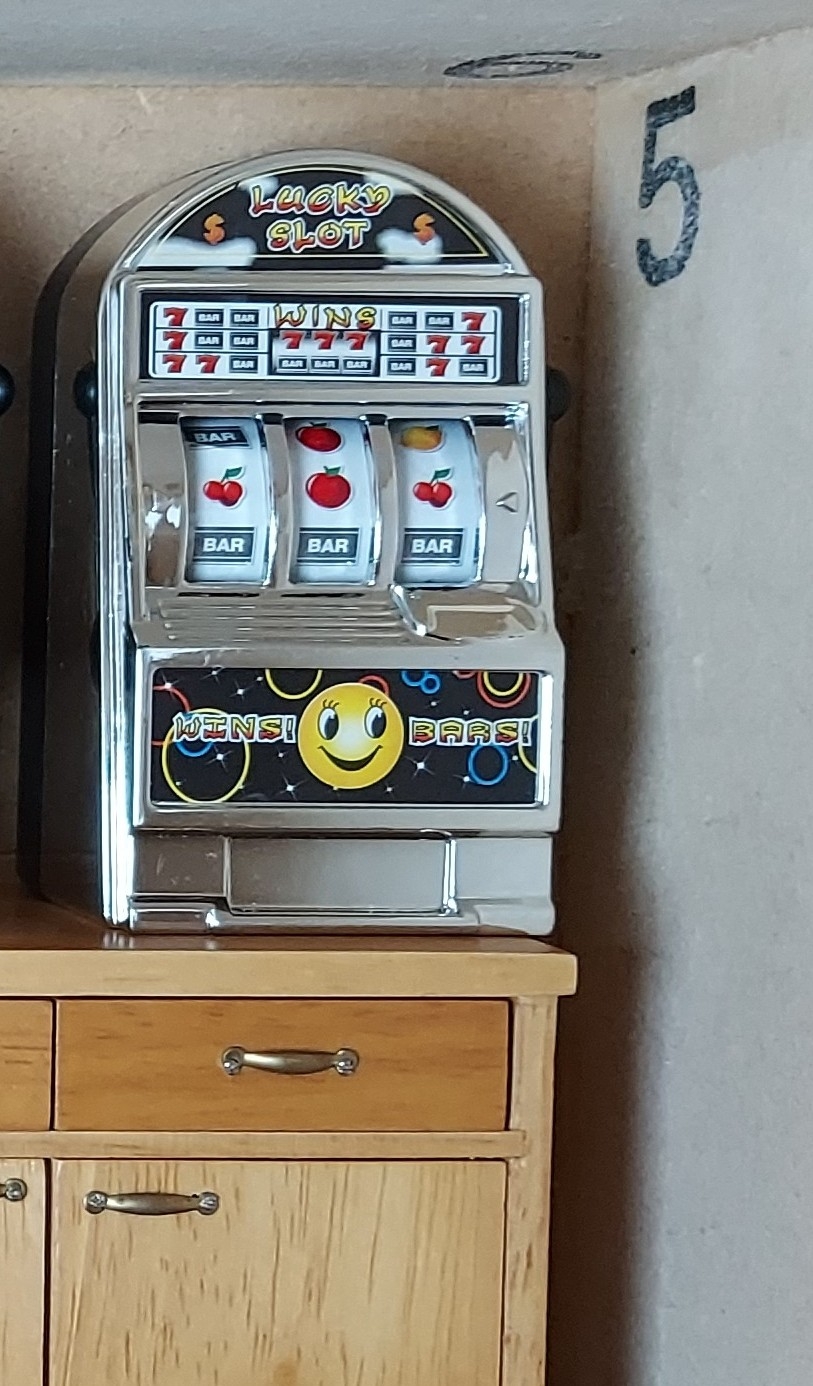 The miiddle floor will be the new home of Wilson's Sweet shop and Newsagents. The first floor will be Mags Tea Room, with Chippie's Takeaway in the kiosk. 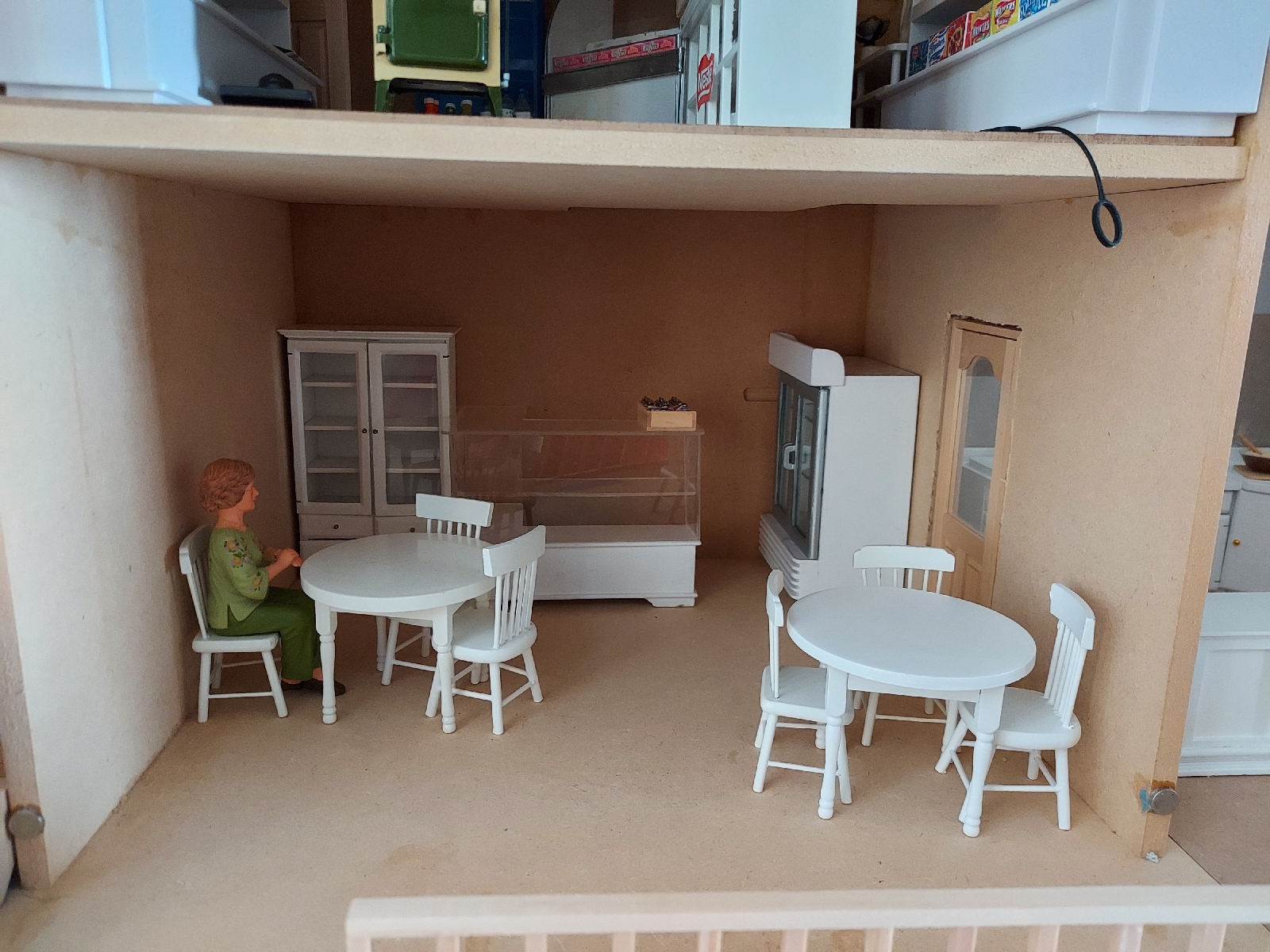 The basement will be split, 2/3 will be The Miners Arms pub and 1/3 Lee-Lee's Toy Shop. I'm not sure yet which side each will be on. 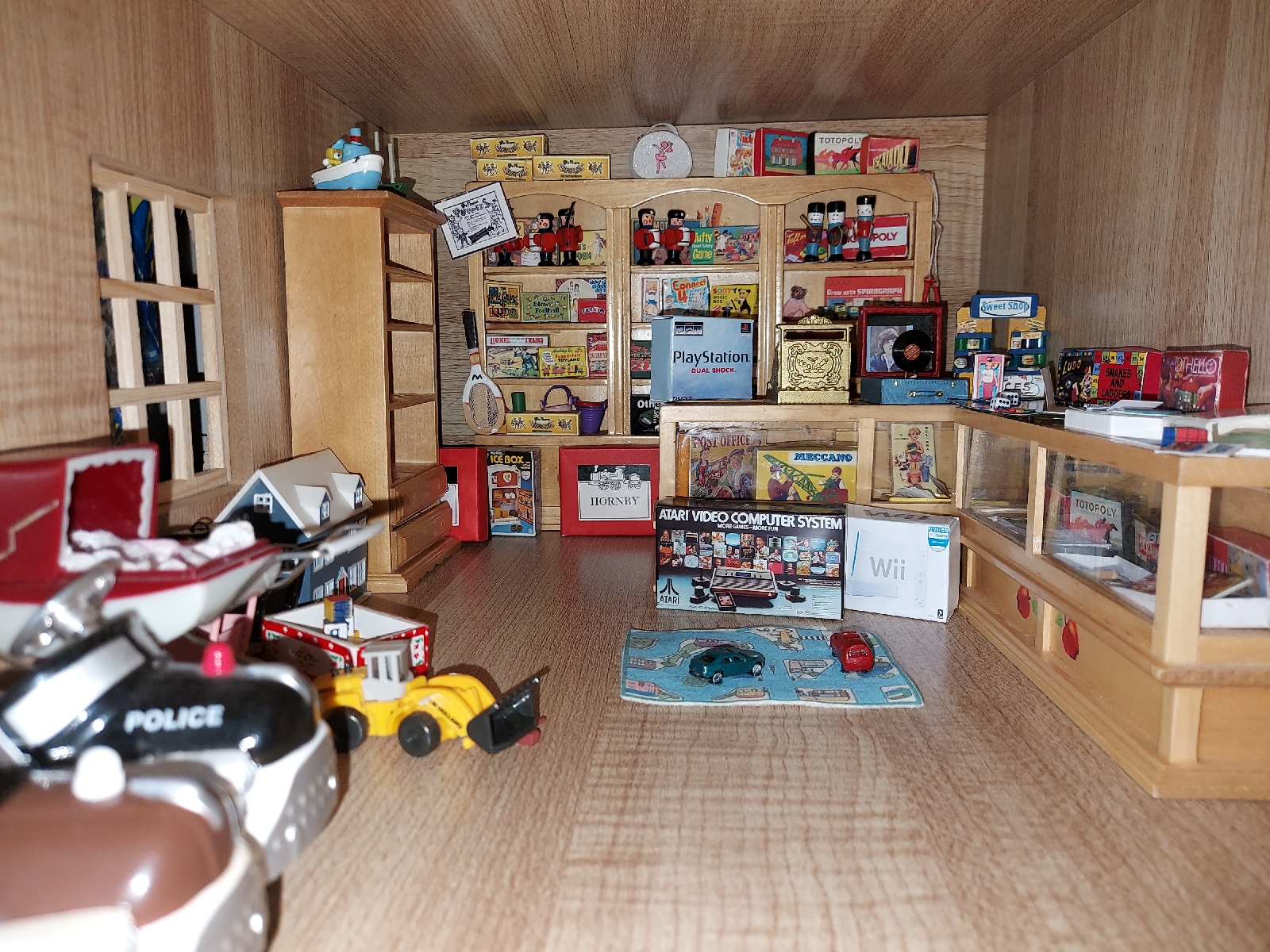 After last week's disaster with spray paint I decided to cheer myself up by buying a basement. Whoops...... 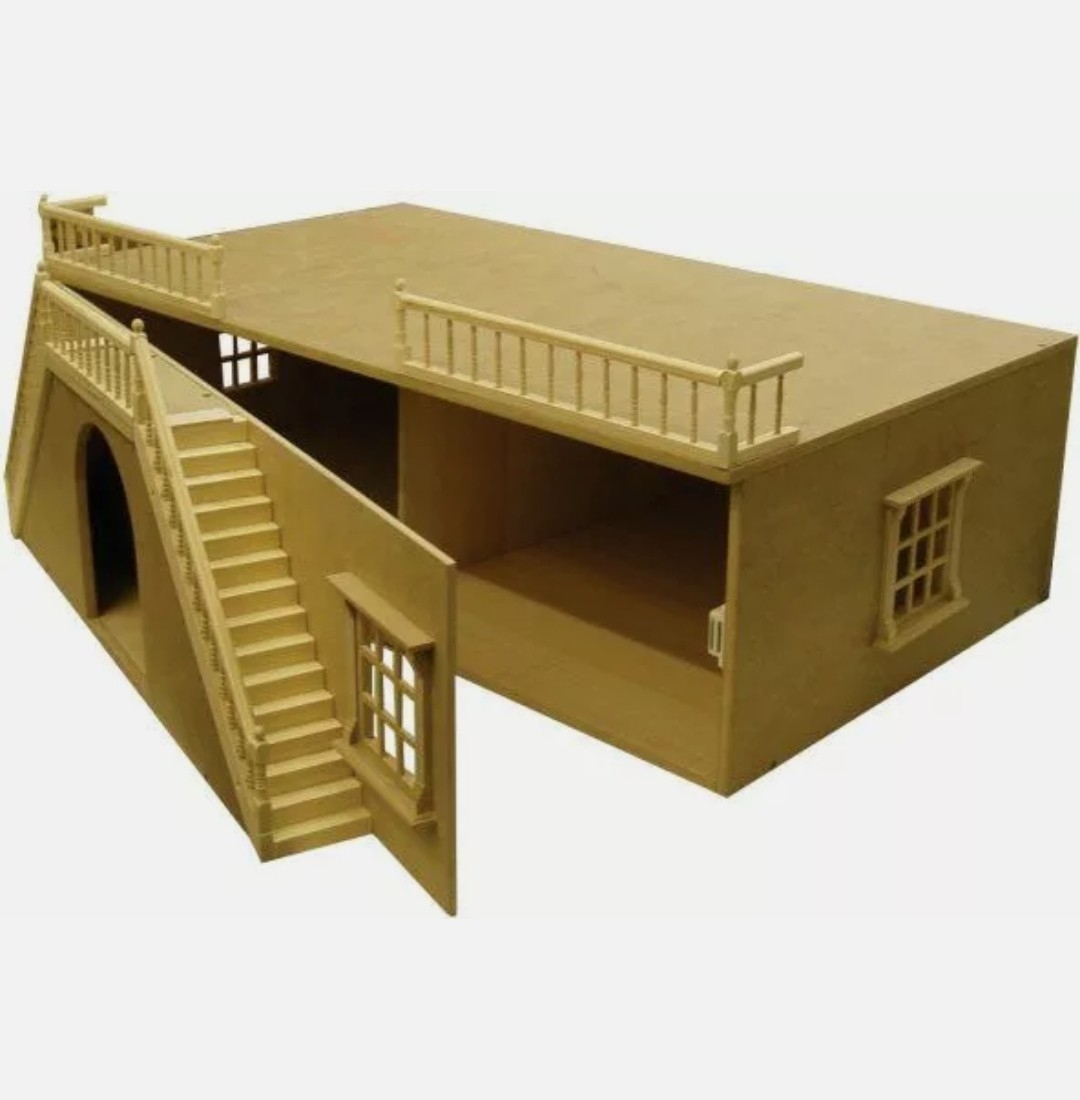 I also bought a conservatory a couple of weeks ago, so the small shop that I was originally intending has spread quite a bit. 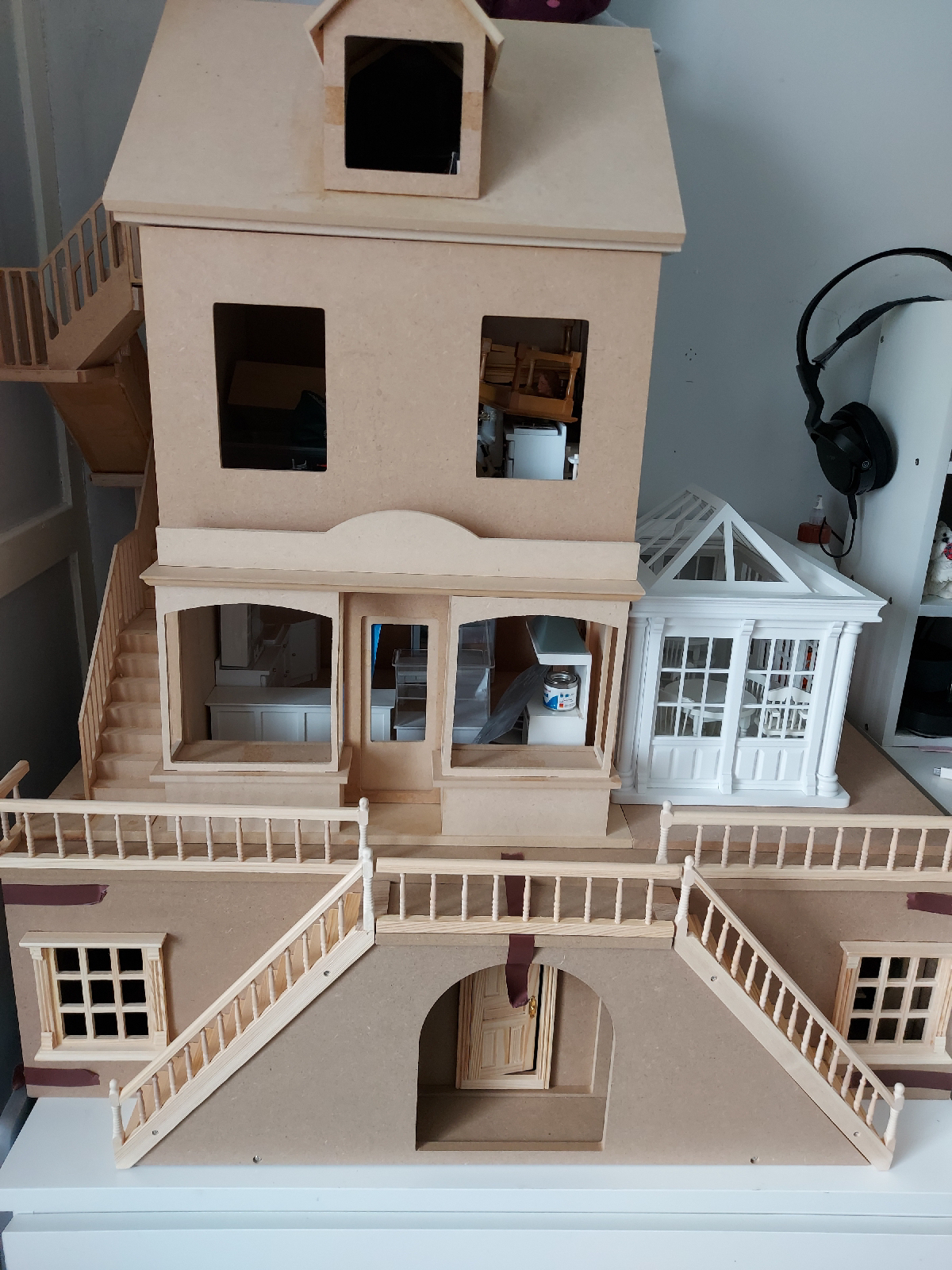 I am trying to make the most of the available space on the top of my drawers (which were previously used as my dressing table). I can shut myself away from the world in my bedroom and potter on, or as my hubby would say 'play'.
He really has no idea how much this hobby costs, he'd have a fit if he knew. But hey ho, he has his booze, cigarettes, footy and the pub, and has nothing to show for the money he spends on that, so I NEVER feel guilty.
I am retired and have the time to play (when my health allows that is). 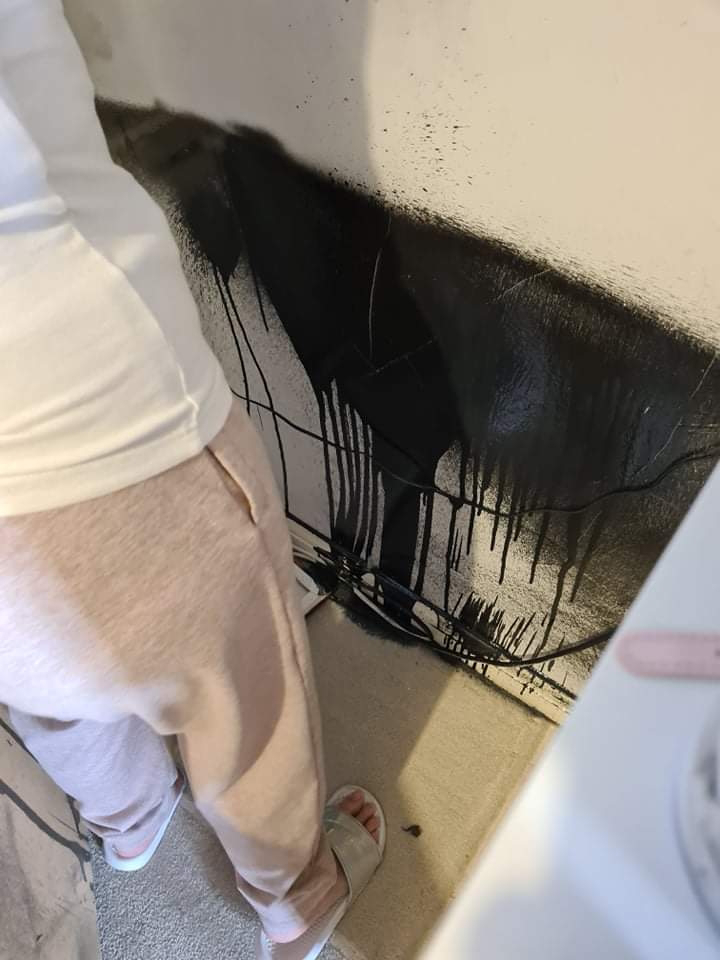 Note to self.....don't keep spray paint on top of your dollshouse. Major disaster Sunday night,  I pulled my Jubilee shop forward to mark out where I wanted to add exterior doors. The spray can fell down the back,  punctured and exploded everywhere. 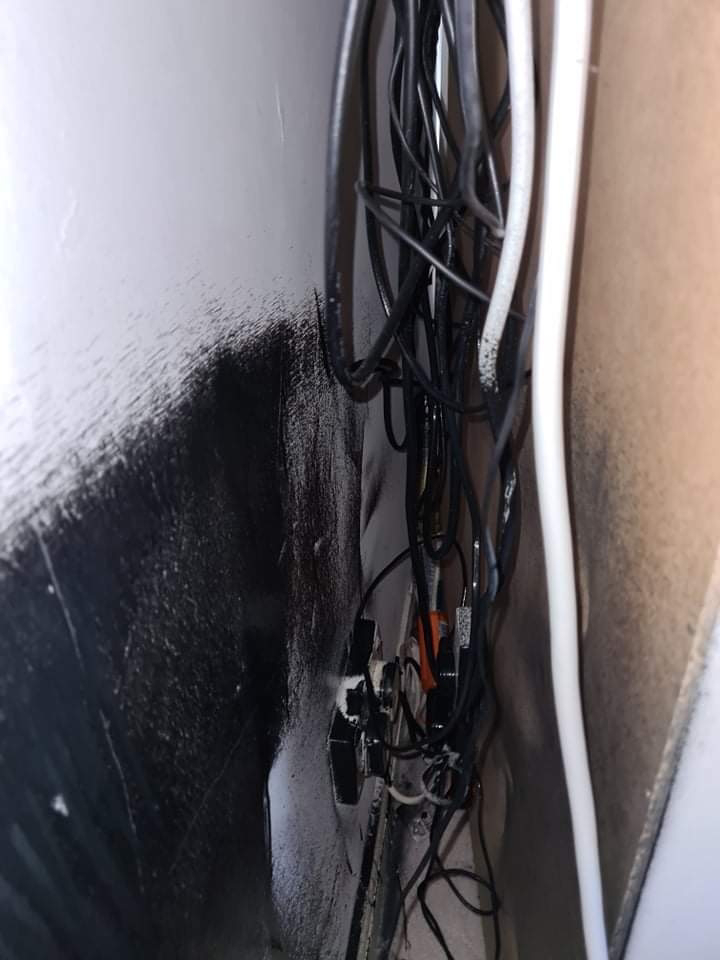 I broke the exterior stairs trying to get everything out the way and had to repair them today. Can't thank my daughter and her neighbour enough for coming to my rescue. Wall is still badly marked but thank heaven it's mostly behind the drawers. Decorating is now in order...... 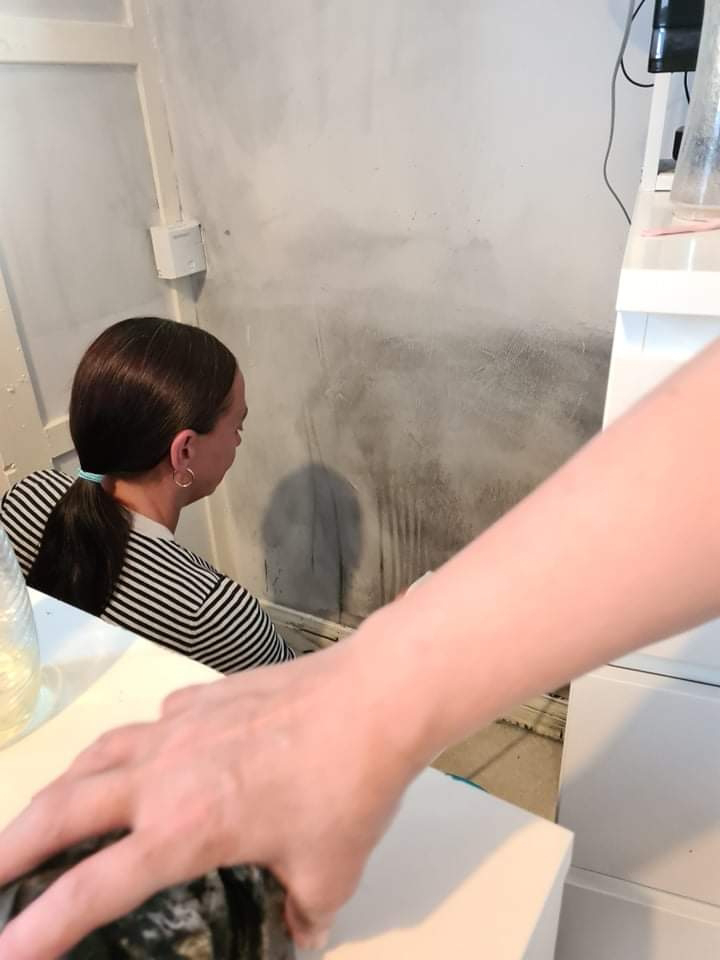 A friend in need

It's been well over 8 years since my bestie Ali and I did anything with her dollshouse mansion. 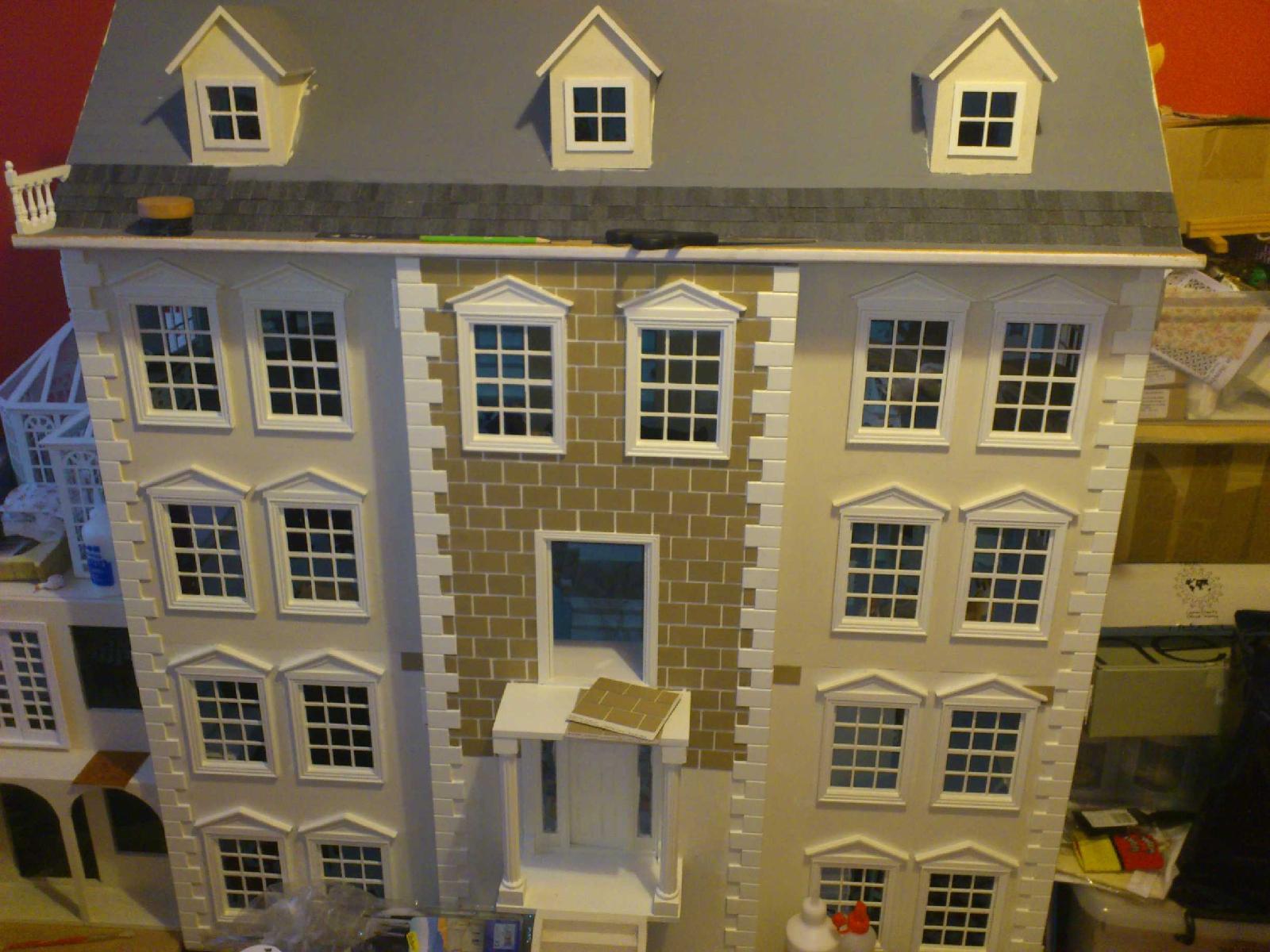 It was very difficult to access the lower floors, so she has been waiting for someone kind to make her a cabinet big enough to stand the house and extension on. Today we painted her massive new cabinet and put the house on its new home. 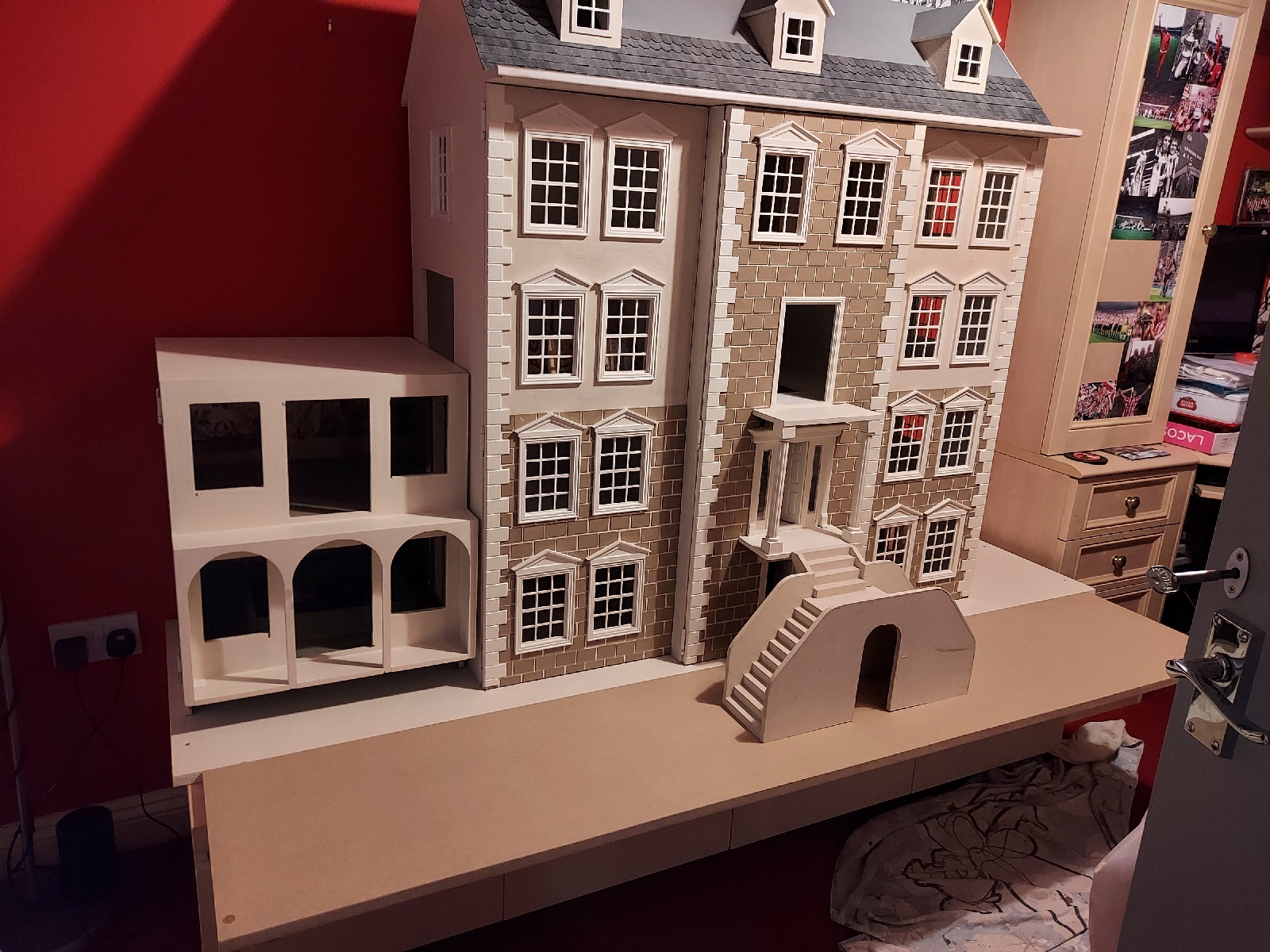 She's got no excuse now and can start decorating.....once she figures out where she wants everything that is.

Finally started our Jubilee shop yesterday.
My Grandaughter Emily and I are doing this one together. 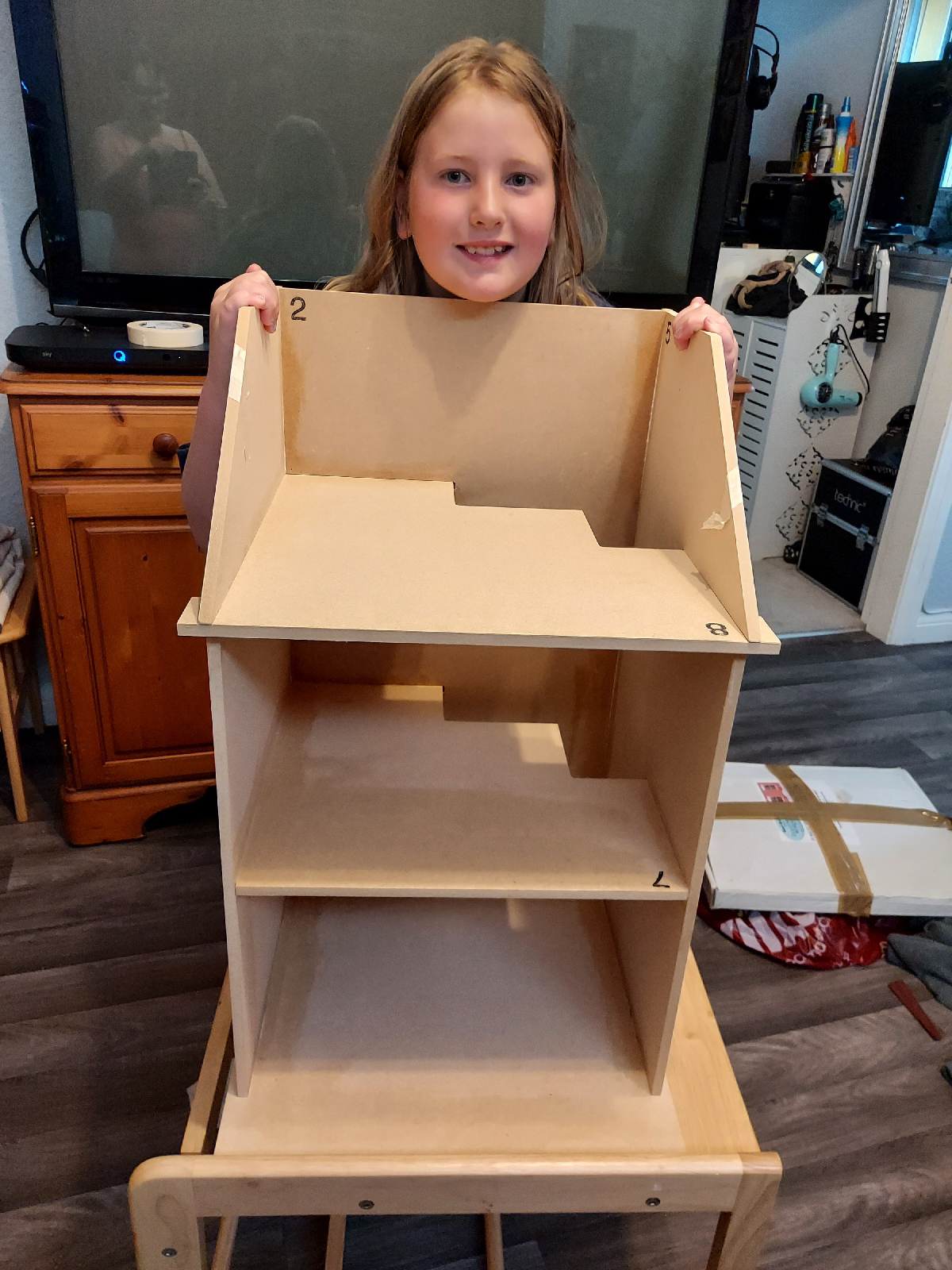 Emily really got hands on building the carcass, and she is a dab hand with the wood glue. She struggled with the screwdriver as she has issues with her coordination and motor skills. We are currently waiting to find out if she has dyspraxia but I think this project will be great therapy for her. 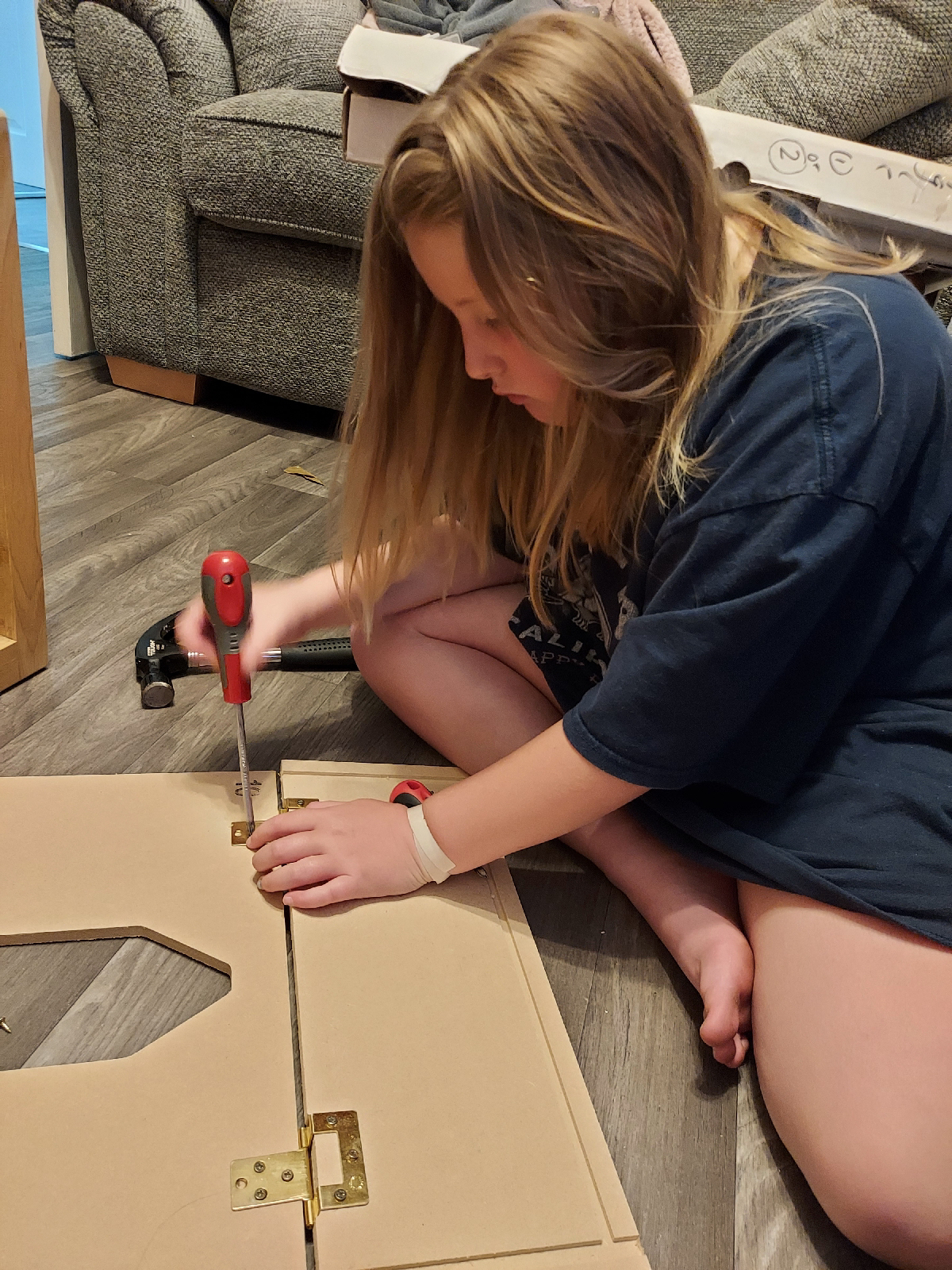 After careful consideration we decided not to put the stairs inside, as it would limit the amount of furniture we could put in. Em was really proud to finish the first stage and wondered if we could somehow put the stairs on the outside. 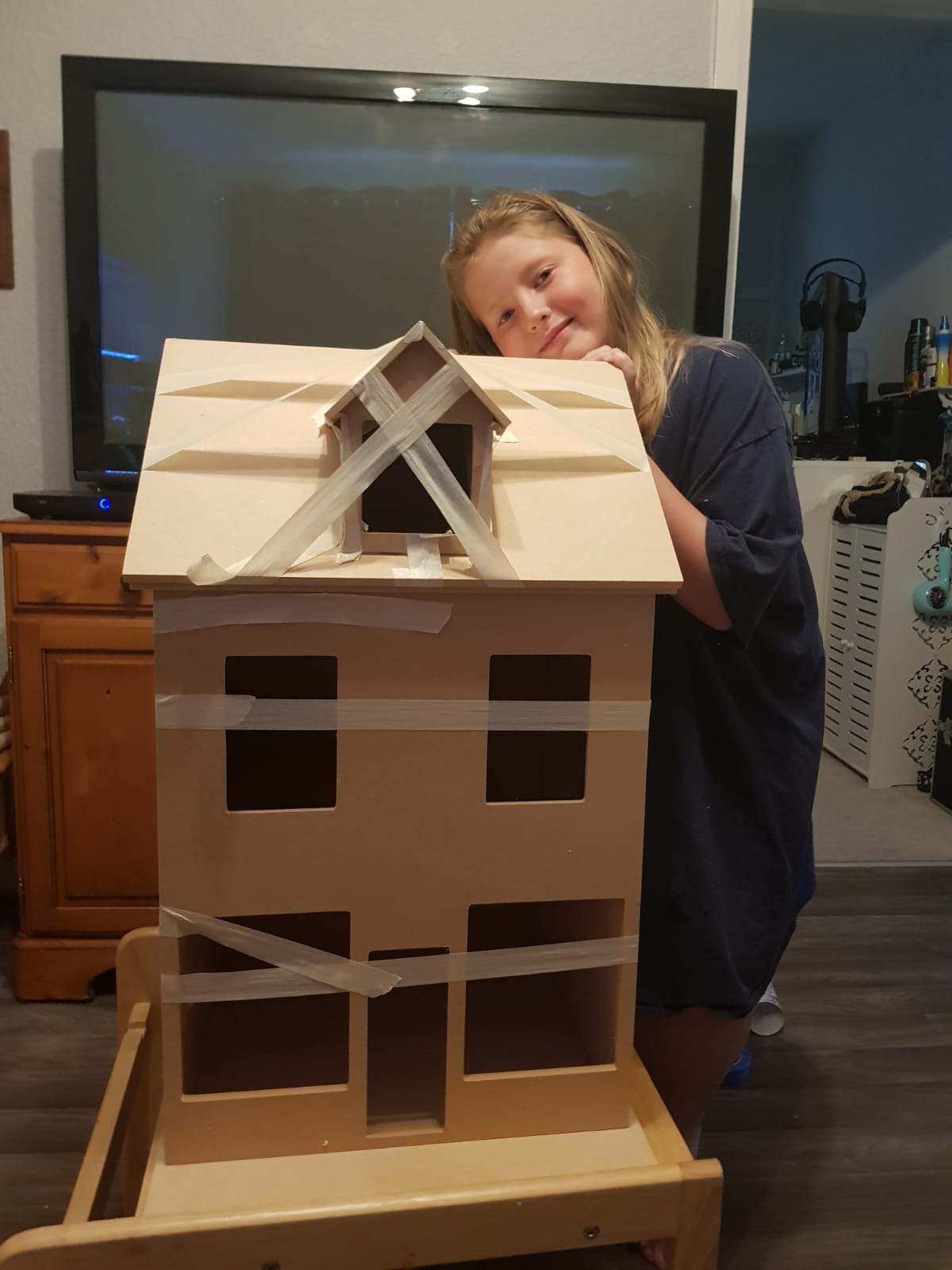 I set about trying to utilise the stairs that came with the kit today while she was at school. It was very tricky and time consuming but I hope she likes what I've done so far. 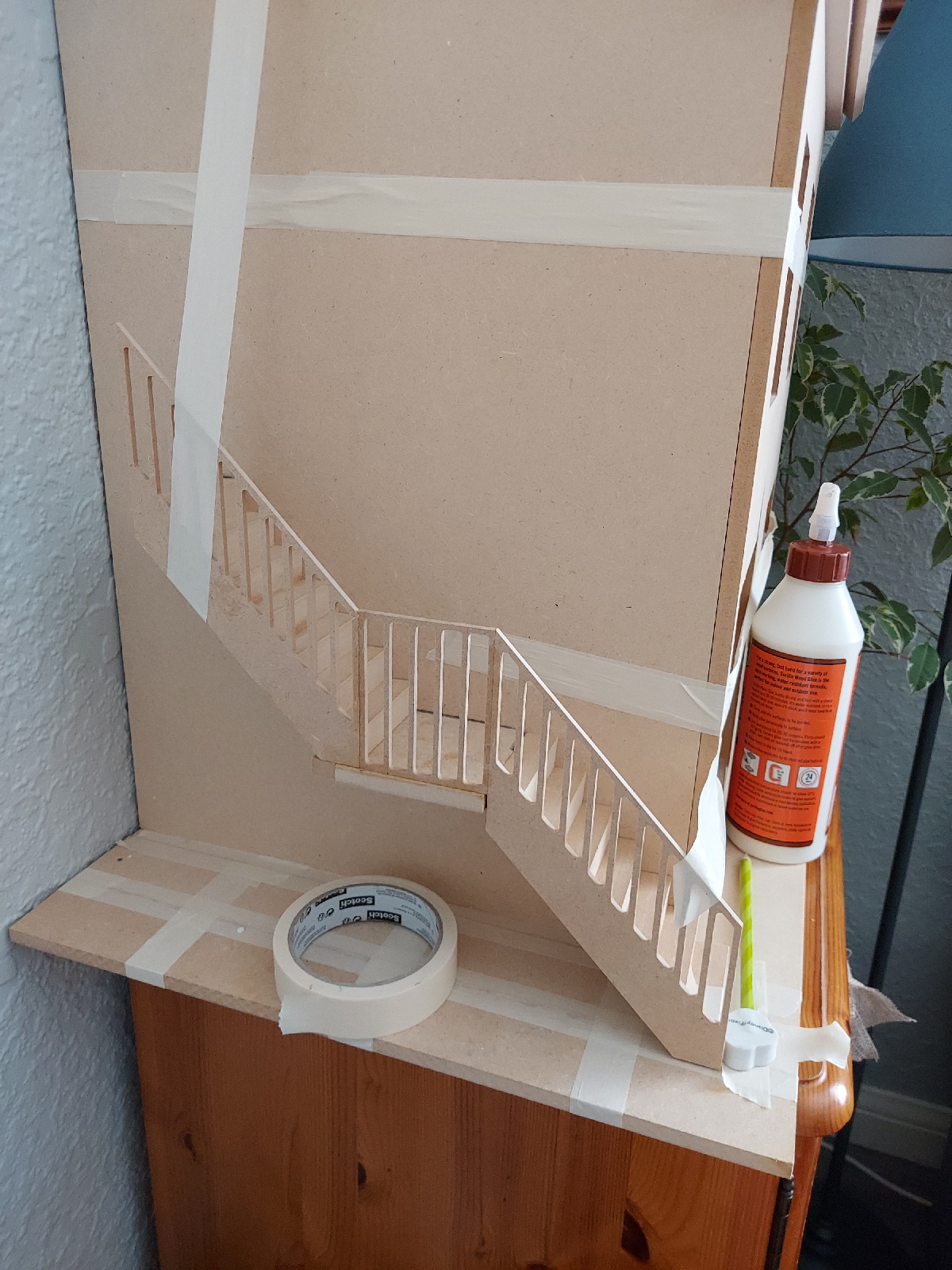 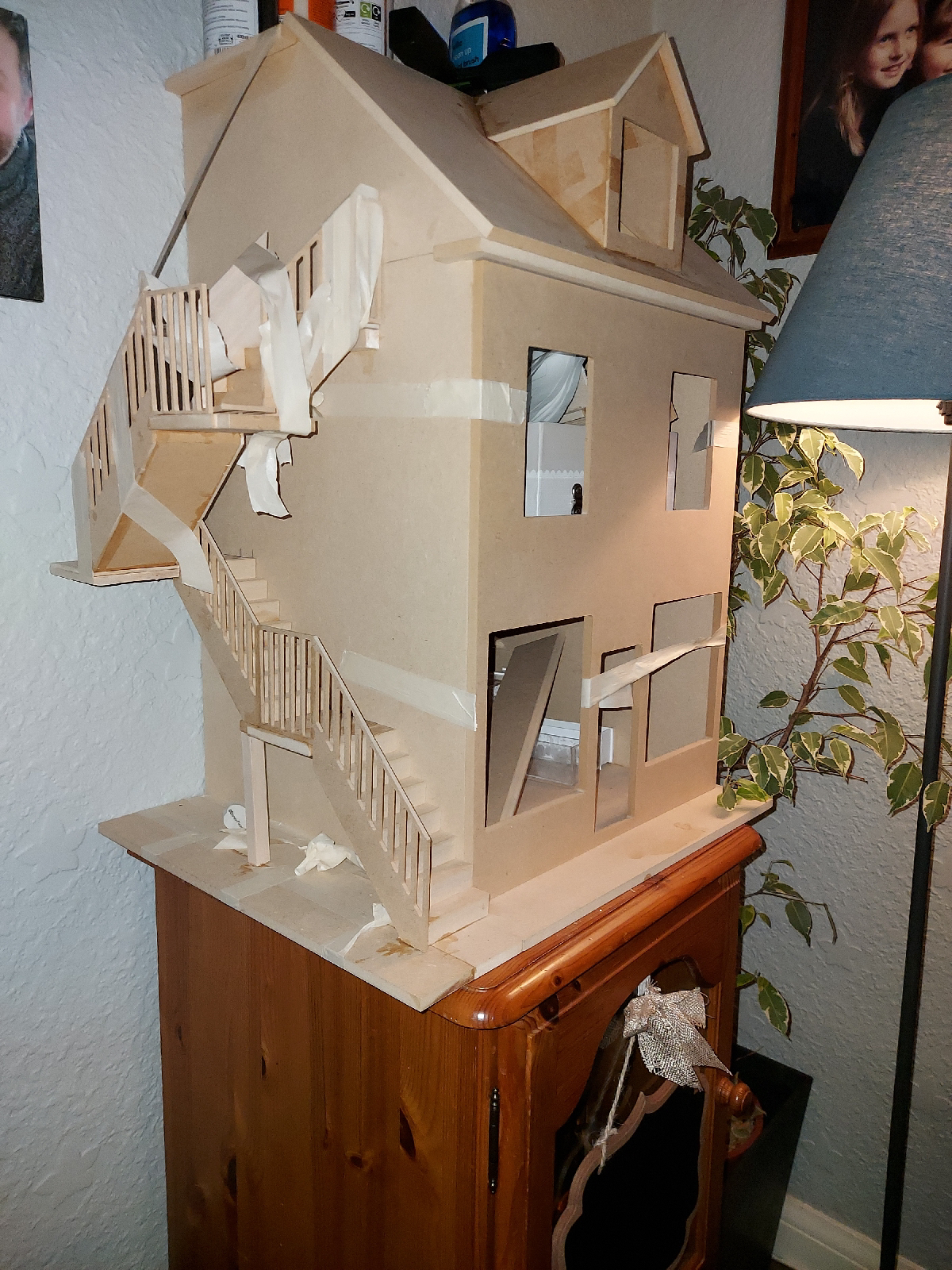 EDIT
Finished the stairs Tuesday. Em loves them, her little face lit up. I plan to spay paint them at the weekend, with Em's help of course. 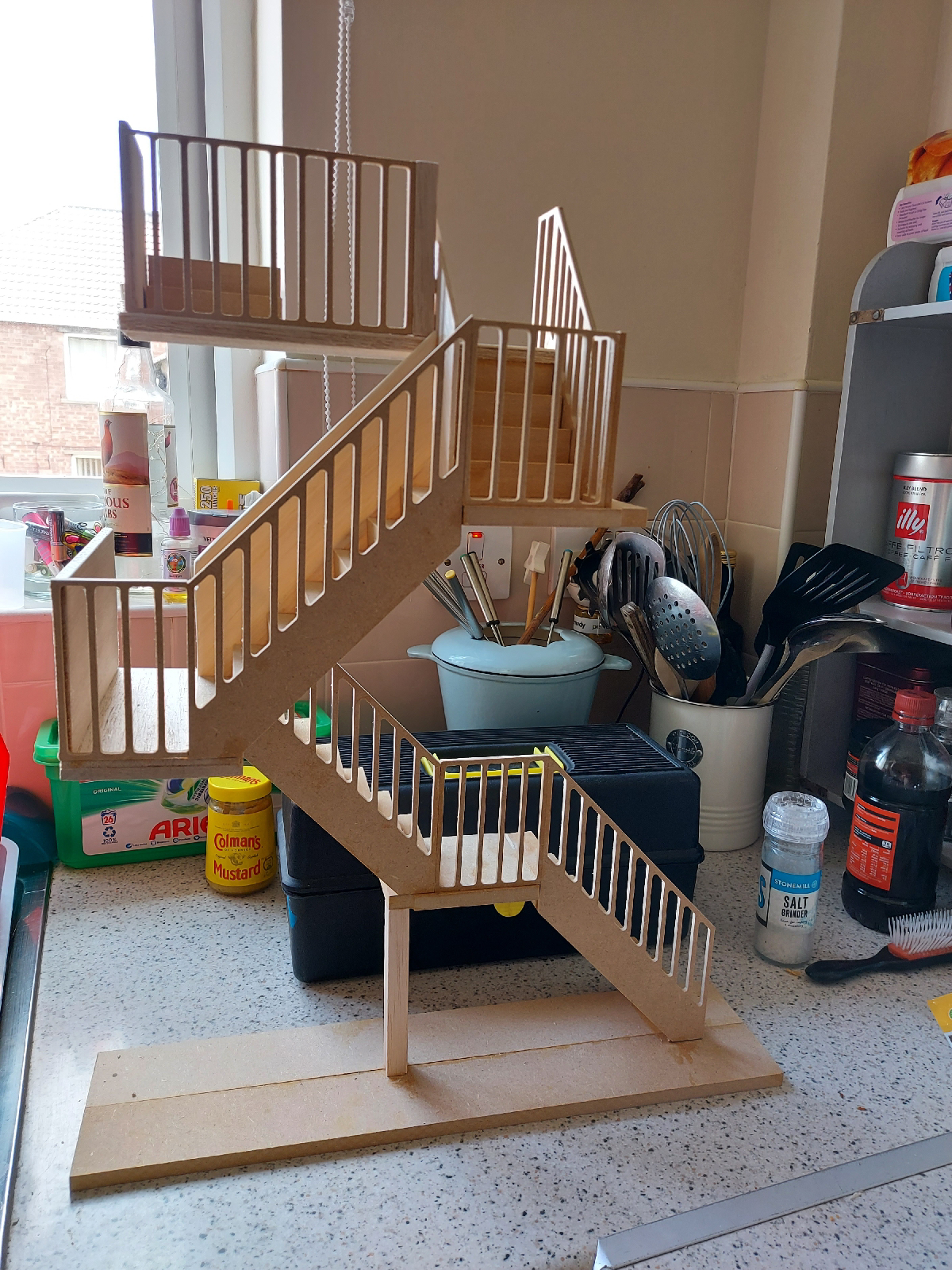 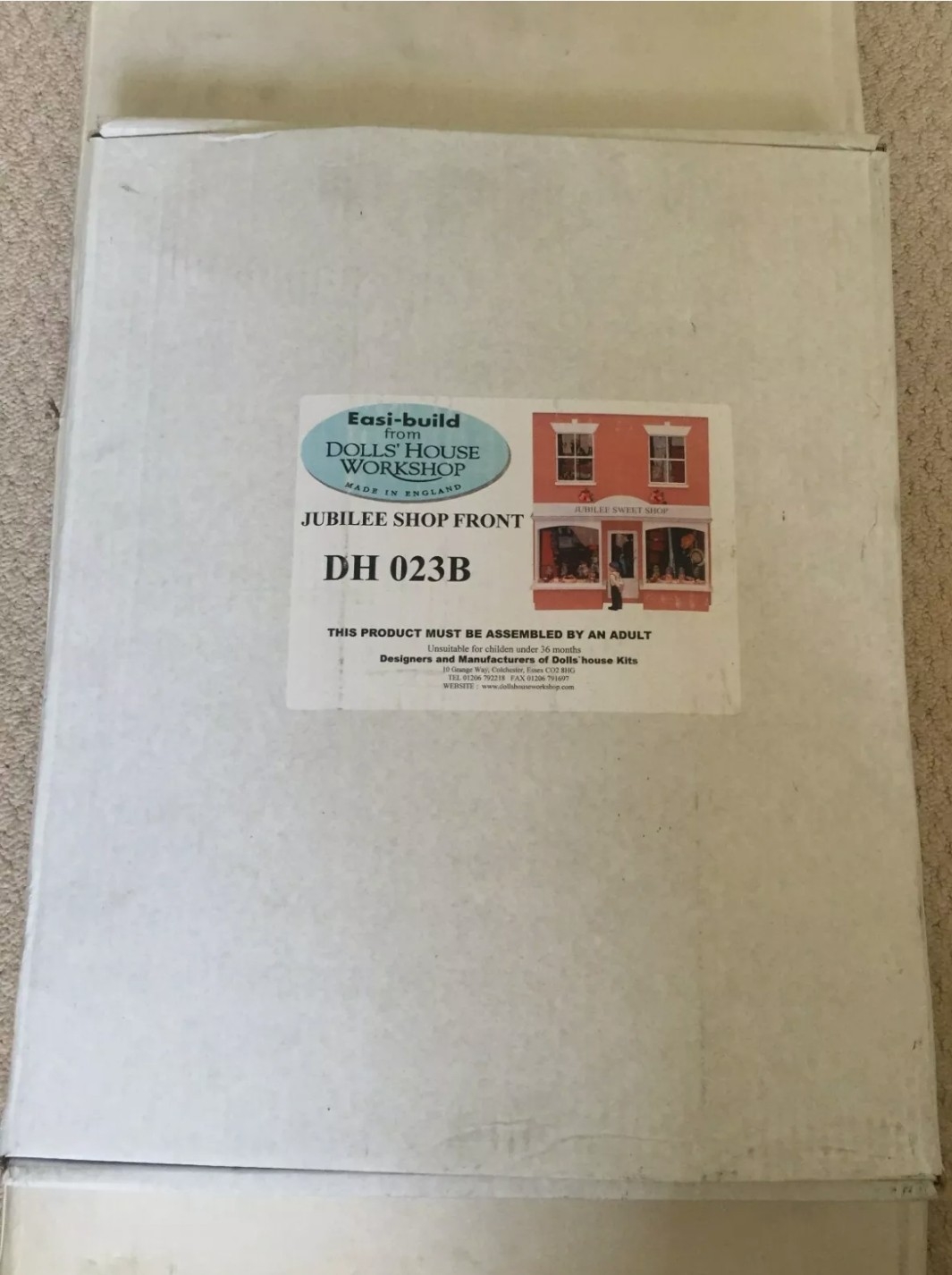 The new railings and staircase have now been added to Jubilee and the basement. The basement stairs are now in place and I'm really plea...

colleybird
I am 50+ and married with 2 grown up daughters and 3 fabulous grandchildren. I began to get into the dollshouse and miniatures craze after I was diagnosed with Breast Cancer in 2005. Having worked for most of my adult life, I found it hard to be at home for great lengths of time on my own. I became very interested in dolls houses because of a shop nearby which sells all sorts of dolls houses and miniatures. I got my first house Springwood Cottage for Christmas that year and the rest as they say is history. So too is the cancer fingers crossed.